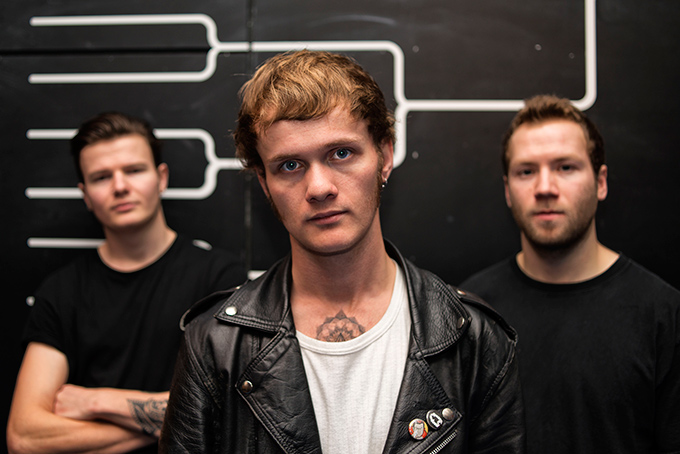 We met up with Blackpool’s anarchy leaders, Strange Bones and talked everything including cheese toasties, Foo Fighters and the NHS.

You’re the first band to offer me a beer in an interview!

Bobby: Stingey bastards!
Will: You can have a cheese toastie if you want?

Well, you’re also the first band to offer me a cheese toastie, as well. Thank you very much! Do you bring the toastie maker to every gig?

Will: Yeah, we like toasties. Look in the fridge, got loads of stuff to go in them.
Bobby: *points at Dictaphone* Isn’t that meant to be recording?

Will: He’s trying to be smart.
Bobby: We just did an interview and it wasn’t recording. It was done by Dev. Our new pal, Dev.

Bobby, Jack and Will, you are brothers. What’s it like being in a band with your siblings. Are there constant arguments or does it make it easier?

Bobby; It’s easier as when we do have arguments, it’s just forgotten about in two minutes. Yeah, there’s no real grudges. So, it kinda works. It’s easier, innit?
Will: It’s easier to tell your brother to “fuck off” than your mate and mean it. Like, if we tell Aaron to fuck off he goes into a sulk.
Bobby: We’ve never told you to fuck off.
Aaron: I’m too nice.

Do you guys not get bored with sharing your life with your brother?

Will: Yeah, but that’s what ear phones are for. (laughs)

You’ve played with like-minded bands such as The Blinders and Cabbage, do you think it’s important for bands to be as political as you and them at a time like this?

Bobby: I think it’s very important, especially at a time like this. Like, more important now than it has been. There’s a lot of bands out there who are just in bands to be bands. But a lot of people have a voice about this stuff but don’t get around to doing anything about it; it gets swept under the rug. But we are all completely fucked if the Tories get in again. It’s a referendum for the NHS essentially. We’ve all been shafted and will continue to be shafted by the Tories.

Bobby: I think everyone should voice their opinions more in day to day life. Just anyone. People need to realise how toxic mainstream media is and how bias and one sided it is. Our “leaders” and their constant justification of themselves through the press is just complete bullshit.

You’ve been on this tour a little while, what’s the reaction been like from fans?

Bobby: it’s been really good! It’s been a bit different than our last tour. More people are coming out to watch us. We’re used to rocking up to a room and playing to a few people, scare them a little bit, then they like us after that; then they come back. Because we’ve been gigging for quite a long time, there’s now more scary people in the crowd.

Who have you got supporting you tonight?

Bobby: We’ve got our pals, White Room from Brighton

Have you had them each night of the tour?

I take it that’s sarcasm?

Will: No (laughs)
Bobby: I’m thinking of starting an indie band and leading him astray.
Will: Just living an indie life.

So, what are you guys listening to on your tour bus?

Bobby: Um, everything. Spud’s obsessed with reggae. We listen to The Idles a lot which is really good. We played a bit of Led Zepplin.
Spud: That was just on Radio 2, mate.
Bobby: Oh, was it? Nice. We also listen to a lot of The Hives on the road.

You were the first British band to be invited to Foo Fighter’s studio in L.A. What was that like?

Bobby: It was really good. It was just one of those things…
Will: Just ‘one of those things’?!
Bobby: ….That didn’t feel real. Life just hasn’t got better since that (laughs). Yeah, we were there for a week. It was amazing. We got to the studio and he was like, “choose whatever you want, man” and there was fucking racks of hundreds of guitars; all of the Foo Fighter’s guitars. And he was like “take what you want”.

Was the partying as good as I’m imagining?

Why were you kicked out?